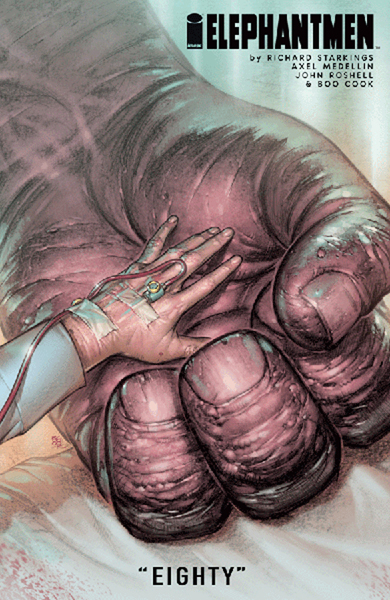 Elephantmen #80 ($3.99) published by Image Comics
Story by Richard Starkings, Art by Axel Medellin, Lettered by Comicraft, Cover Art by Boo Cook
Issue #80 is the last issue of the Elephantment series that started in 2006. The series ends with a death and a new mystery which hopefully means that this isn’t the last we see of the Elephantmen. I am several TPBs behind in this series, so I purchased this comic to see how the series is wrapping up. There are lots of questions that I’m hoping are answered in the previous comics (like what happened to Ebony’s legs). This comic brings the series to a very poignant end. I hope to see more in the future.
I Hate Fairyland #80 ($3.99) published by Image Comics
Story and Art by Skottie Young, Lettered by Nate Piekos, Colored by Jean-Francois Beaulieu
This is the first issue of the series that doesn’t focus heavily on Gert. In fact, Gert does not appear at all! Duncan Dragon returns as a new worker for the FPS. Fairyland Postal Service? Fairyland Parcel Service? The devil chooses him to deliver a package to Horribella and witness the birth of a new evil that hates Fairyland. This is the beginning of a new story arc and I’m curious who the new villain is and how he (she?) will interact with Gert. Skottie Young’s art is the best cartooning of his career. I’m glad to see him focusing his art and humor on this creator owned title. 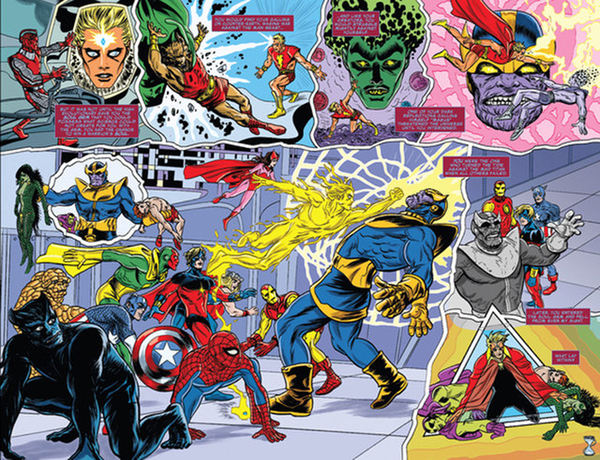 Infinity Countdown: Adam Warlock #1 ($4.99) published by Marvel Comics
Story by Gerry Duggan, Art by Michael Allred, Colored by Laura Allred, Lettered by Cory Petit
Cover Art by Arron Kuder and Ive Svorcina
In all honesty, I bought this comic because it was a one shot drawn by Mike Allred. Lucky for me, it features the history of Adam Warlock as told by Kang. Kang has always been one of my favorite Marvel villains and Warlock’s history features the High Evolutionary (another one of my favorite Marvel villains). Because this is a time traveling tale, it begins with the Kang trying to prevent a future by manipulating Warlock. Unfortunately, this is the most recent of hundreds of failed attempts, and Kang is getting increasingly more desperate. This results in sending Warlock back even further in time to be entombed by Rama Tut, the man who will become Kang. So what was supposed to be a one shot is not… it’s actually the lead story of Infinity Countdown with Infinity Countdown Prime follow by the Infinity Countdown mini-series and lots of other tie-in “one-shots”. The art by Mike and Laura Allred is what you would expect from them, so while I’m disappointed that the story is not self-contained, I’m loving the art. 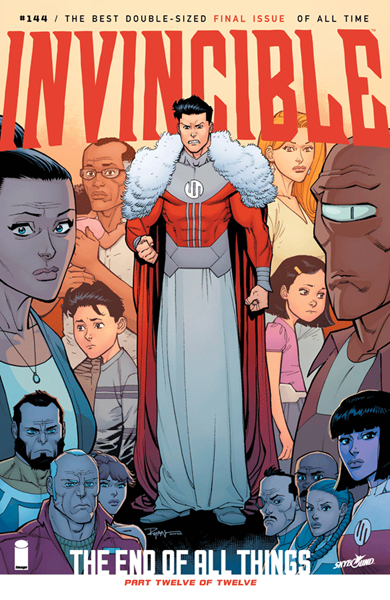 Invincible #144 ($5.99) published by Image Comics
Story by Robert Kirkman, Pencils by Ryan Ottley and Cory Walker, Inks by Mark Morales and Cory Walker, colored by Nathan Fairbairn, Lettered by Rus Wooten
This is another series that’s ending that I’ve fallen several story arcs behind on. Honestly, I can say that from where I’ve left off, this ending is quite a surprise. We began the series with Mark (Invincible) gaining powers and ends with him having fully grown into those powers and their responsibilities. Cory Walker takes over the art as the story leaves Earth and that was a great way for Ryan Ottley to leave the series. The six panels of Terra from early adolescent through becoming a young adult was a smart way to show the passage of time. The death of Atom Eve was touching and was the great use of the comic book page turn. Invincible is one of the best superhero epics.
Savage Dragon #232 ($3.99) published by Image Comics
Story and Art by Erik Larsen, Colors by Nikos Koutsis, Flats by Mike Toris, Lettered by Ferran Delgado
Savage Dragon is the greatest superhero epic of all time and Erik Larsen shows no signs of slowing down. We now have two sons of Savage Dragon and Rapture running around. Malcolm Dragon is on Earth living in Toronto, Canada. Michael Dragon is in Dimension-X with Alex, Angel, and Jennifer.  For me, the Savage Dragon comic is a master class in superhero comics. Larsen has great love for superhero comics and it shows in every issue for his comic.
TAGS : Cory Walker|Elephantmen|Erik Larsen|Invincible|Mike Allred|Ryan Ottley|Skottie Young