My Comic Must Haves

Every month, I will go through Previews magazine published by Diamond Comics and comment on the comics that pique my interest. To avoid a lot of repetition, I'm using this article to outline my basic interests and the comics that I purchase on the regular basis. In my monthly Previews review, I will reference and link to this article as a resource.
As I’ve gotten older, I’ve trimmed down my comic book collection significantly. So my approach to collecting comics is:

In addition to the suggestions above, there are concepts and creators that have earned my dollars, so I support them when given the opportunity.  Here's a quick list in no particular order.
Astro City
I was a big fan of Astro City prior to the move to DC. Over the years, I';d just lost interest. Recently, I stumbled upon a couple of stories featuring G-Dog (drawn by Mike Norton) and I was hooked again. Busiek weaves iconic superhero stories and Astro City is a great setting for him to play with all the superhero subgenres and tropes.

Hellboy
Mike Mignola's Hellboy is a modern classic. Mignola is a masterful storyteller and artist. I wait and buy the Library Editions.

Elephantmen
I was sad to see the large European style albums by Ladronn disappear, but I love the concept and supported the beautiful hardcovers. I was saddening to see the hardcovers disappear, but I’m still reading the TPBs, which will sadly be ending as the series wraps up with issue #80.

Fourth World and Kamandi
These are two of my favorite Kirby concepts and feature a vast number of my favorite Kirby characters. Whenever DC releases new or old stories featuring these characters, those stories are sure to climb to the top of my purchase list. These concepts are not enough to guarantee that I purchase the comic or storyline, but I will at least notice the comic. DC, if you’re listening, I’ve love to have Dave Gibbon and Ryan Sook return to tell more Kamandi stories.
Cerebus
The 300-issue epic that is Cerebus is one of the greatest American comic epics of all time. It’s a singular creative vision completed by Dave Sim and Gerhard, and spans barbarian tropes, religious themes, high society, and literature. My goal is to have a complete set of Cerebus hardcovers on my shelves and a full run of the Cerebus comics. I plan to purchase the new remastered Cerebus TPBs (via Diamond) and the first set of Archive portfolios (via Kickstarter) as they are created.

Conan
I’m not a big Robert E Howard fan.  Beyond Conan and Red Sonja, I don’t really care for most of his work. Honestly, I don’t even care for any of his writing except the Conan stories that have been adapted by other writers. If it’s a comic featuring Conan, then I’ll likely buy it. As of right now, I have a full run of the Dark Horse hardcovers and the Chronicles of Conan TPBs.  I’m working on completing my Savage Sword of Conan TPBs as well as the various Dark Horse mini-series. John Buscema is my favorite classic Conan artist. I enjoyed all the modern artists’ takes on Conan.
I also prefer Jason Momoa’s Conan to Arnold’s.

Savage Dragon
Savage Dragon is the one 32-paged comic that I’m guaranteed to buy every month. Erik Larsen is clearly having fun with his character and I will support him until he’s done. Much like Cerebus, Savage Dragon progresses through the lives of the characters and shows you the ups and downs that come with life. Larsen doesn’t shy away from controversy or politics. I greatly look forward to have a complete set of hardcovers collecting this comic, but until then, I’ll continue to grab it off the shelf.
Walking Dead
I only buy the Walking Dead (and Invincible) in hardcover and I’m generally 1-2 hardcovers behind. When I get the hardcovers, I’ll read them in a single sitting.

I Hate Fairyland
I buy the single issues. I buy the collections. I buy the hardcovers. I love Skottie Young’s art style and irreverent sense of humor.

Terry Moore
Ever since the very first Strangers in Paradise mini-series, I’ve been a fan of Terry Moore’s work. After SiP finished, I was there for Echo. After Echo, these was Rachel Rising. After Rachel Rising, there was Motor Girl. After Motor Girl, SiP returns. 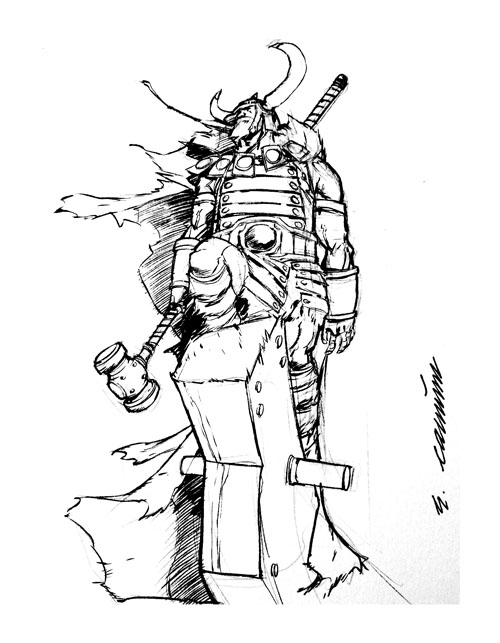 Other comic creators that I support (mostly blindly)

I’m sure that this list (the comics and the creators) will expand as more comics are made. I look forward to adding more names as time goes on.
TAGS : Astro City|Cerebus|Conan|Dave Sim|Elephantmen|Fourth World Jack Kirby|Hellboy|Kamandi|Kurt Busiek|Mike Mignola|Saga|Savage Dragon|Skottie Young|Terry Moore